You are here: Home / Destinations / South America / Peru / Life on the Amazon River

During a week-long cruise on the Amazon River in Peru I had a lot of time to observe life on the river. While we spent a majority of our time looking for wildlife there were always local people around going about their daily lives. They were as interested in watching us as we were watching them. We benefited by having guides that had grown up in the area so they could answer our questions about life on the river. The way of life is so different from what I have experienced anywhere else.

Farming not only provides food to feed their families but also to sell in the larger towns to provide an income. The family in the photo below is waiting for a boat to take them into the larger town so that they can sell their produce.

Waiting for the boat to take their produce to the market

Fresh pineapples waiting to go to market. We bought some for breakfast.

Fishing is an important part of daily life in the village. Like farming it feeds their families and provides income.

Fishing on the Amazon River

The catch for the day

The government of Peru has a program to teach the villagers how to create crafts to sell to tourists. It is a great program because they learn a new skill that helps them provide income for their families. The craftsmanship of the items that they were producing was outstanding and we purchased some nice souvenirs to take home.  The guy in the photo below was working on a replica of our ship. It was very impressive.

Unfinished model of our ship

The only way to get up and down the river is by boat. There are no roads in this part of the Amazon so everyone has some kind of boat to get around. Some have simple canoes that are rowed by hand and some have larger boats with a motor attached. There are also regular ferry boats that are used to travel longer distances. 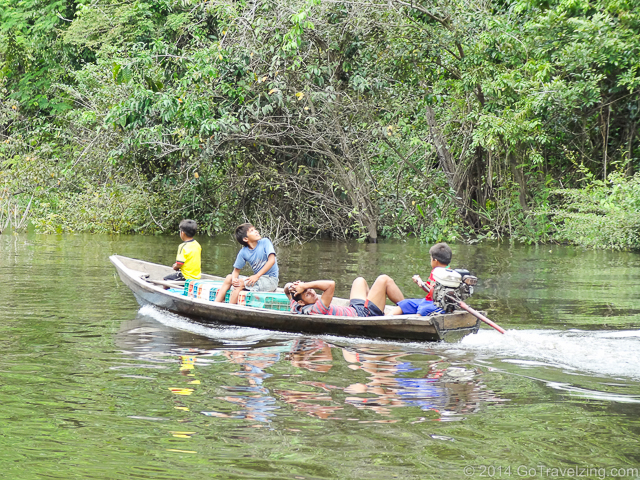 I like how the smallest child is driving the boat

The canoe is a standard form of transportation.

The two villages we visited had around 20 homes each. The homes are open air structures built on stilts. The stilts are to keep them dry during the yearly floods of the river. They also help keep snakes and other wildlife out.

Some villages have generators that are used to power lights for a couple hours at night. The house below actually had a satellite dish which is something I did not expect to find.

I bet they watch football on the satellite dish

Almost all villages have a football field. The building in the back is a one room school house.

The grass is cut by hand using a machete

I thought it was strange that there was a long concrete sidewalk running through this whole village until I found out the reason. It is so that they can see the snakes at night because poisonous snake bites are a major cause of death along the river.

Sidewalks are so that they can see snakes at night

One family was running a small store out of their home. I think I spot some Inca Cola in the back.

This family had a small store set up in their house

The families in the villages tend to be large so there were a lot of children around when we visited. Most children attend school in their village or a nearby village. They also help with the farming, fishing and caring for their younger siblings.

We got to interact with the children during a visit to their school.

The river bank can also be used as a slide

Spending a week on the Amazon was such an amazing experience. I learned that life on the river is not easy and the environment makes it difficult to just survive. Despite the odds there were thriving communities and people all along the river.