Do you think that cruises are all about 24 hour buffets, water slides, casinos, endless shore excursions and partying with thousands of your closest friends? If you do you are in the majority.  That type of cruise is not for everyone and I am happy to report that there are other types of cruises that offer a totally different experience. I went on one of those different cruises in December 2013 when I spent a week with my Dad on an International Expeditions Amazon Cruise. 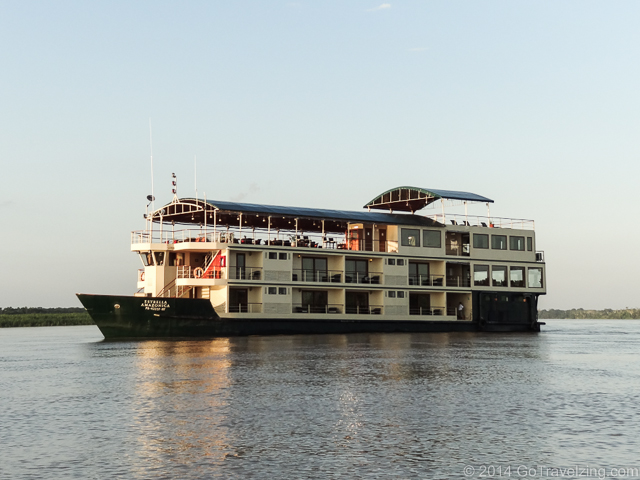 The organized part of the trip started as soon as we arrived in Lima.  We were met by a representative of International Expeditions who escorted us to our hotel in one of their waiting vans. I actually arrived about and hour and a half before my Dad and was going to wait but they told me that there was another van that would bring him to the hotel.  Since it was late at night this allowed me to check into the hotel and get cleaned up after a long day of travel.

The hotel that we were put up in was the Swissotel in the Miraflores district.  The hotel is a nice business class hotel that was comfortable.  I do not have much more to say about it because I only slept there and ate the buffet breakfast.

The tour began after breakfast where we met Renzo our Expedition Leader and the other guests.  We boarded a bus and were taken on a tour of historic Lima. After the tour we had lunch and headed to the airport for our flight to Iquitos.

Upon arrival in Iquitos we boarded another bus to take us to the ship where we started the cruise part of our trip.

The La Estrella Amazonica (Star of the Amazon) was about six months old when we took our cruise. It is 139ft long, holds up to 31 guests and was built specifically to cruise the Amazon.  There are four passenger decks that contained the cabins, dinning room, lecture room, fitness room, bar and observation deck.

The cabins were spacious for a cruise ship and each had a good size bathroom and balcony. Our room had two single beds with a wardrobe, desk and night stand. There are a couple of rooms with three beds as well as one single bed room. 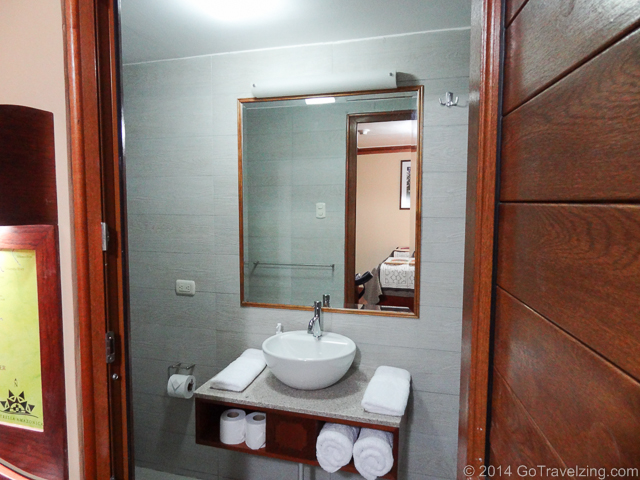 The rooms have plenty of storage drawers under the beds and in the wardrobe.  The beds are comfortable and had nice linens. The bathrooms are large for a ship and had plenty of room to maneuver in.  The shower is a good size and more importantly it has good water pressure. 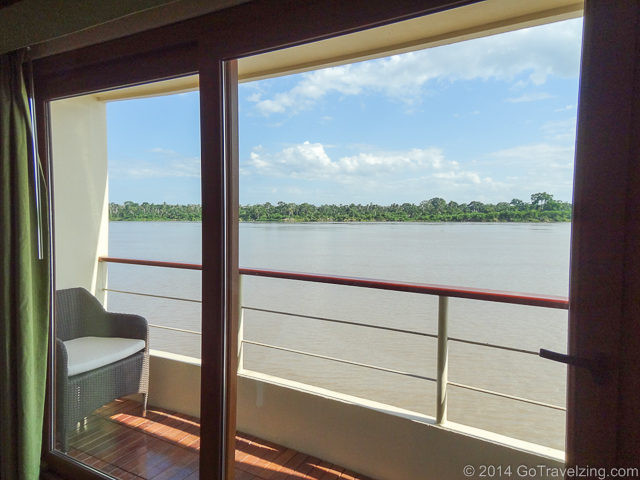 The rooms were cleaned daily while we were out on a excursion so there was never anyone knocking at the door asking to clean the room while we were there. Most passengers did not even bother locking their doors during the day because it was such a safe environment.

The dining room is located on the second level at the back of the ship and has a buffet station and six tables. There are full size windows on three sides of the dining room so there was always a great view of the river while we were eating. There is no assigned seating so you could sit with whoever you wanted. 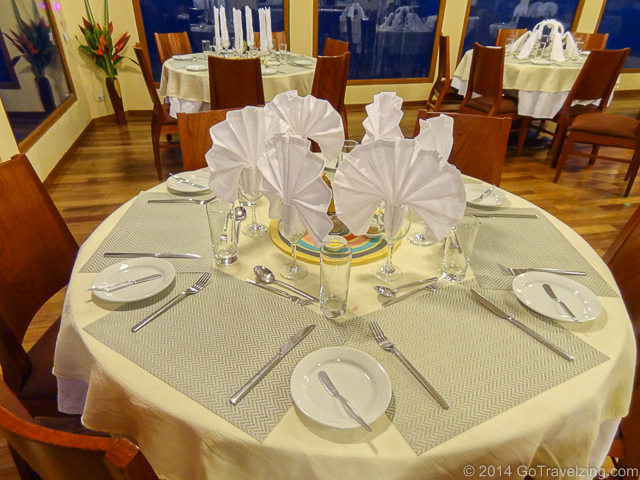 The lecture room has a large screen TV and comfortable chairs and couches.  This is where the guides gave almost nightly lectures on different subjects about the Amazon River. 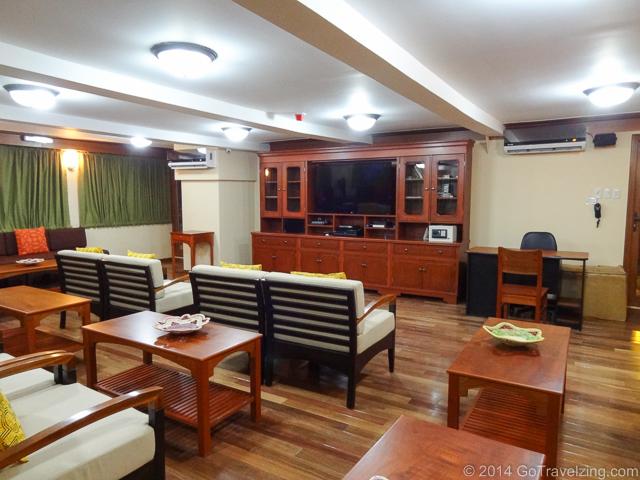 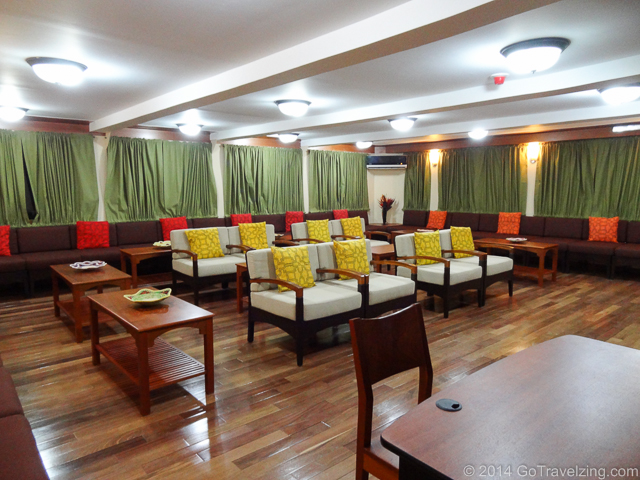 The bar deck is on the third level and held a small fitness room, the bar and plenty of tables, chairs and couches.  It is open on the sides with roof over most of it.  We spent a lot of time here when we were not on an excursion.  This deck is where the nightly happy hours and entertainment took place. It is a great place to hang out and observe the life on the river.

Sunset on the Bar Deck

This is at the top of the ship.  It is partially covered and has lounge chairs to relax on.  Some passengers used it for exercising or sunbathing.  I did not spend much time up there except for some stargazing.  It is amazing how many stars you can see when you are on the river.

The ship was only six months old so everything felt like it was brand new.  The only real issue was that there was a strong vibration at the rear of the ship.  It was an issue when we were eating or in the lecture room because the vibrations were intense and noisy.  Many times the Captain had slow the ship down to decrease the vibrations while we were in the lecture room. We had a cabin in the front of the ship and could not feel it but others that were near the back said it bothered them. There were a few other minor kinks that needed to be worked out and those were being taken care as needed.  Hopefully by now they have fixed all the issues.

The crew was amazing. They were always friendly and helpful. Since it is a small ship the crew has to perform multiple functions from cleaning the rooms, to serving meals to playing nightly with the band.

Each cruise has an Excursion Leader and two Naturalists. Our Excursion Leader was Renzo Zeppilli. On most ships he would be considered the Cruise Director but he was so much more than that. In addition to keeping everything on schedule and running smoothly he was leading the small expeditions up and down the Amazon. His knowledge of the wildlife and birds was incredible.

The Naturalists on our cruise were Usiel and Segundo. These two guys were also amazing. Both of them had grown up on and around the river and were a wealth of information about life on the Amazon. They both have over twenty years of experience as guides on the Amazon River. Their ability to spot wildlife from far away never ceased to amaze me. I had a hard time seeing some with binoculars even when they showed us exactly where they were.

The daily activities are posted on the whiteboard located next to the dining room.  They were also announced at the meals so that everyone knew what was going on.

The schedule for the morning

Wildlife spotting was a major part of our time during the cruise.  There were usually two excursions every day aboard the smaller skiff boats.  There were two skiffs used for all the off board excursions.  Each skiff had a driver, one or two guides and usually another crew member to help out as needed.

One Of The Skiff Boats

We spent a lot of time on the skiffs cruising up and down the small tributaries of the Amazon River.  Most of the time we were looking for wildlife such as three toed sloths, exotic birds, pink or grey dolphins and monkeys.

We saw so many different kinds of animals that it was impossible to keep track of them all.  Good thing we were given a five page checklist that we could mark off everything we had seen.

Macaws in the Amazon

After the first day and a half of excursions I was getting tired of spending so much time on the small boats but by the third day I was starting to enjoy it and look forward to it.  Even the early morning ones when I had to get up at 5:30AM.

During the week long cruise we had two excursions to visit the local villages and see how they lived.

Village #1: The first village we visited was called Nueva York (New York.) We met with the town Mayor in his home and learned a little bit about what life was like in the village. We also visited the local school and interacted with the children. 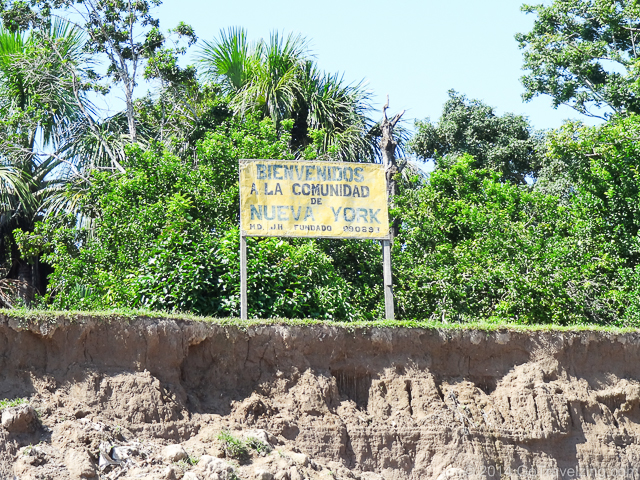 The Village of Nueva York

Children at their school in Nueva York

Village #2: The second village we visited was called San Jose.  At this village we learned about the water purification plant that was built by International Expeditions in partnership with the village.  We also spent time with the Shaman learning about his role in the community. 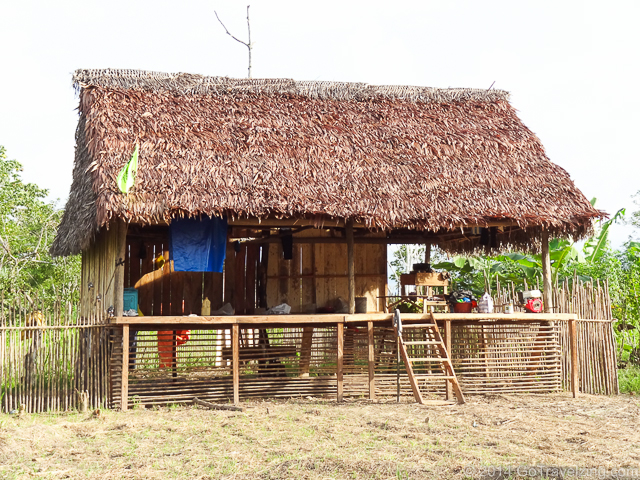 Typical House in an Amazon Village

At the end of our visit the villagers had set up blankets with locally made handicrafts for sale.  The crafts were nice and sold at very reasonable prices.  It was nice to know that we were buying from the people that produced the product.  This is one way that villages support themselves.  I bought a wooden piranha to commemorate my success at piranha fishing the day before.

One morning we took the skiffs out early and had breakfast on the water. After breakfast we broke out the fishing poles and went piranha fishing.  This was one of the highlights of the trip.  It was a lot of fun and the piranha are not as scary as they look in the movies.  Between my Dad and I we caught nine piranha.  At dinner that night we got a chance to eat what we had caught. 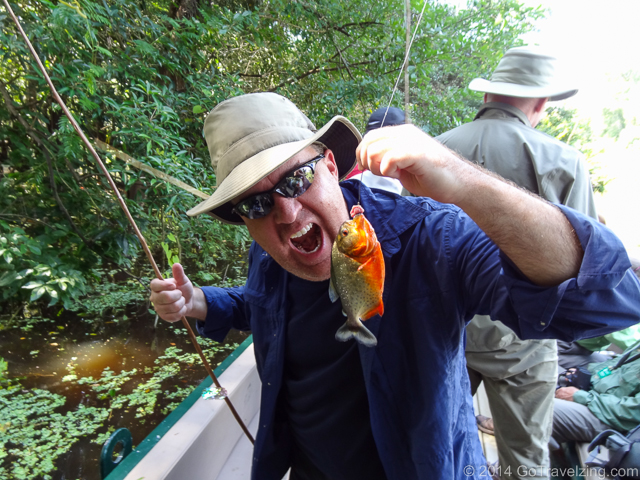 The Piranhas were not so scary.

Meals were served buffet style in the dinning room.  There was usually a fresh salad and three or four type of entrees.  The meals were mostly Peruvian food with some theme nights that included Italian and Chifa. Chifa is a mixture of Peruvian and Chinese food and was developed by the large population of Chinese immigrants who moved to Peru in the early 1900’s.

All meals had a couple of types of fresh juice to drink.  We had so many different kinds of juices during the week.  Most of them I had never heard of before.

For dessert there was usually fresh fruit, cake and sometimes home made ice cream. I would have never thought I would be getting fresh ice cream in the middle of the Amazon River.

The cruise ended back in Iquitos on Friday night where we spent the night on the ship.  On Saturday morning boarded a bus for a tour of Iquitos. The first stop was a school that worked in partnership with International Expeditions. There we learned about the programs at the school and how they were working with the locals to educate the children.

After the school tour we headed to the El Dorado Plaza Hotel located next to the Plaza De Armas. At the hotel we were give keys to a room to use for the few hours that we were there before our flight back to Lima. This was the first time we had internet access in a week. Most of the other passengers including myself were eager to find out what was going on in the real world.  It turns out that I did not miss much except the thousands of unimportant emails.

We had lunch at the hotel and walked around the central square for a while before it was time to go to the airport.

Since this was an organized trip I did not do my usual research about where I was going and what I was going to do. I decided to go with the flow and let myself be surprised by what happened. This was a good decision because I did not have an expectations about the trip and was able to enjoy everything as it happened. It turned out to be an amazing experience that I will never forget.